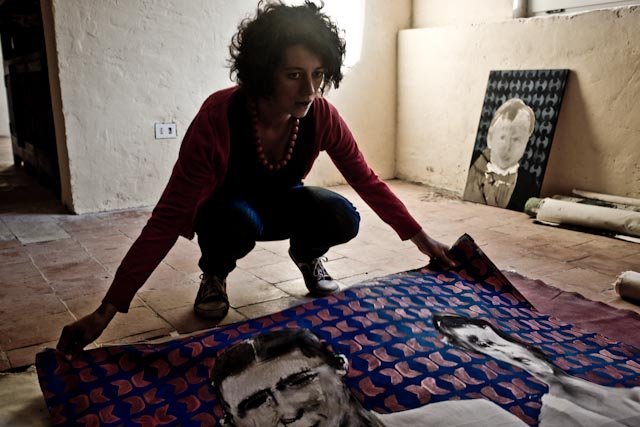 ”My work explores the places and faces around me – I am context dependent and having moved home and country a lot– my practice has been a means of connecting myself to location and people.

I often work with historic photographs, making fast and spontaneous drawings before painting. Painting is like a conversation – I want to talk about something, but I don’t know what will be said until it happens….and often what is not said explicitly, is the most important part of the painting.

I am process-led and very physical- constantly challenging the materials to test what they can and cannot do.

A painting is ‘finished’ when there is a balance between poetry, tension and ambiguity – both in terms of subject matter and stylistic balance.

My interactive magnetic paintings have moveable pieces and push traditional painting boundaries by inviting the viewer to actively participate in the narratives and the creative process.”

CHRISTINA THWAITES grew up in Derbyshire, in rural England. She studied History of Art and French literature at the University of Edinburgh in Scotland and at the Ecole du Louvre in Paris. After her MA, she attended LaPortaBlu Art school in Rome to focus on painting. Thwaites has run art workshops and community projects and has exhibited and lived all over. In Italy she ran an international art residency program near Rome. In Palestine she ran workshops in a refugee camp. She lived in an artist squat house in Amsterdam and in a remote village in Indonesia. In Canberra (Australia) she worked with ANCA (Australian National Capital Artists) whilst continuing to exhibit in Europe (with solo shows in London and Rome and a joint show with British Pop artist Peter Blake.) Thwaites has shown work in prestigious establishments including CCASS in Australia (Canberra Contemporary Art Space), Palazzo delle Esposizioni in Rome and the MACRO (Museum of Contemporary Art in Rome). She currently exhibits with galleries in Italy and USA and works from her basement studio in Orono, Maine (USA), where she lives with her husband and two children.